THE WEAKNESSES OF HYDROGEN.

1- A production that generates greenhouse gases.

- Hydrogen is a very energetic gas (3 times more than diesel for the same mass) which unfortunately does not exist today in natural state in sufficient quantity to be economically profitable.

Hydrogen is currently obtained mainly from oil, but its production releases large quantities of greenhouse gases.

Another very well known and totally green production method is water electrolysis, which is much less widespread because of its efficiency.

Today, to industrially produce 1 KW of green electricity from hydrogen from electrolysis, 4 KW of electricity must be spent, i.e. a final yield of 25%, compared to 33% for nuclear power.

Hydrogen is the lightest gas in the whole universe and occupies a large volume under standard atmospheric pressure conditions.

It takes the volume of 11 m3, of a large utility vehicle, to store 1 kg of hydrogen and be able to travel 100 km at its wheel.

It is therefore essential to increase its density by strongly reducing its volume while controlling a good tightness of the tanks because it is highly flammable.

A - The first solution consists of compressing the hydrogen to 700 bars in very resistant carbon fiber tanks with a limited capacity and manufacturing by filament winding, which is very expensive. A 125-liter tank containing 5 kg of hydrogen allows a car to travel 5 to 600 km.

B - The second solution consists of cooling the gaseous hydrogen to minus 163°C to transform it into liquid hydrogen; 600 times less volume at atmospheric pressure.

Without any compression, 5 kg of hydrogen can therefore be stored in a 75-liter tank, which must, however, be perfectly thermally insulated.

For the moment, liquid hydrogen is reserved for very high-tech applications such as space travel.

It is therefore important to seek to improve both the means of production and storage while ensuring respect for the environment.

The H2-O project has a triple objective:

- Sea water, which is one of the raw materials for hydrogen, is in abundance at the foot of offshore wind turbines, it is free and requires no pumping, transport or pressurisation (+2%).

- The very energy-intensive phases of compression, decompression (+15%) to reach 700 bars or liquefaction (+35%) of the stored hydrogen are therefore also eliminated; the pressure will depend on the depth of the installations and will be perfectly constant (20 bars at a depth of 200 metres).

- The conversion of hydrogen into electricity via a fuel cell or a hydrogen turbine coupled to a generator will be done in the immediate vicinity of the tanks in order to optimise efficiency and minimise line losses (+2%).

- The transport of electricity over long distances remains simpler, safer, faster and more economical than that of hydrogen at equal power, especially if the underwater cable linking the offshore wind turbine to the shore is reused.

-16,000 m3 of hydrogen stored at a depth of 200 metres would allow the production of a gigawatt whatever the hour.

- The construction of these concrete tanks lined with a polymer or concrete-dolerite composite liner will make it possible to considerably reduce their price and increase their volumes.

- Submerged tanks are not subject to any pressure other than Archimedes' thrust since they are open to the outside (principle of an inverted bell).

- The volume of the tanks is therefore not limited, unlike pressurised hydrogen tanks made of carbon fibres or isothermal tanks for liquid hydrogen at -163°C.

- Safety against the risks of explosion and fire will therefore be reinforced by the immersion and constant temperature of the tanks (17.5° at a depth of 200 metres).

- The immersion of the tanks will eliminate all visual pollution. 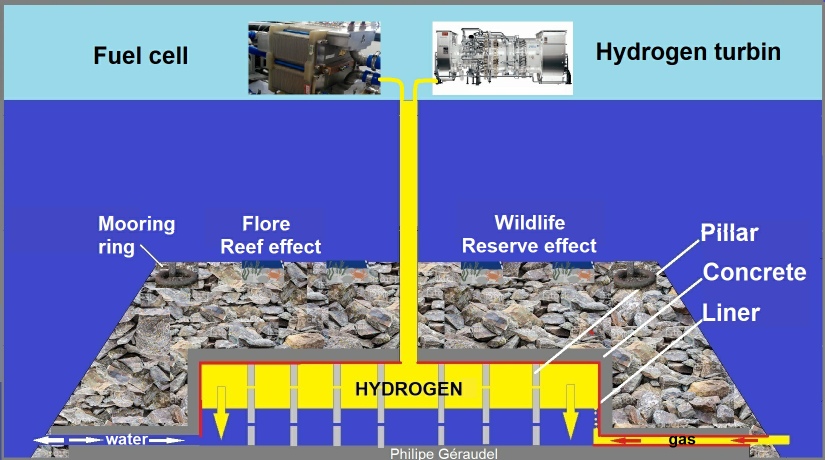 Diagram of a tank.

- The rockfill of the reservoirs, intended to compensate for the Archimedes' thrust, should favour the development of underwater fauna and flora (reserve effect, reef effect) and allow a solid anchoring of the floating wind turbines.

- The co-produced oxygen could also be used for the production of chlorine, salt, soda and their derivatives, as well as on site in fish farms for the oxygenation of the aquatic environment which favours fish growth.

- The production, storage and instantaneous conversion of green hydrogen into green electricity should make it possible to reduce greenhouse gas emissions, compensate for the intermittency of renewable energies and store large quantities of "green electricity" offshore at a low cost.

(H2-O: symbolises the Offshore Separation of Hydrogen and Oxygen from Water)

Given the size of the project, it appears necessary to create a consortium that can bring together the technical skills and financial capacities of several companies: " H2-O.eu ". 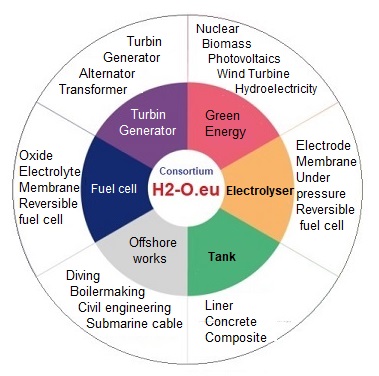 An alternative to electricity storage:

The 3 phases of the production cycle:

- Production of hydrogen by electrolysis of sea water.

The aim is to compensate for the intermittent nature of renewable energy sources by storing and producing green electricity from green hydrogen.

Surplus renewable energies such as wind, photovoltaic or even nuclear power, in the meantime, will be converted into green hydrogen through a pressurized seawater electrolyser immersed at great depths.

The green hydrogen released will then be stored in very large-capacity tanks, themselves immersed in the immediate vicinity of the electrolyzer.

This stored hydrogen, under pressure under seawater, in very cheap concrete tanks will then be transformed locally into green electricity via a fuel cell or a hydrogen turbine coupled to a generator.

The green electricity thus produced will be redistributed via the same network according to needs and peak hours. 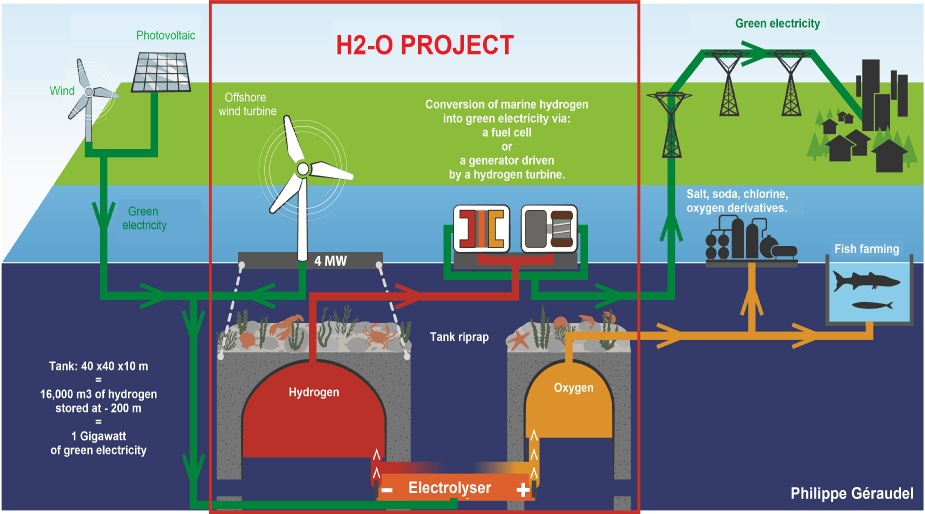